In antiquity, achillea millefolium was used for a vast number of things. Its name ‘achillea’ is derived from its association with Achilles, the Greek hero, who purportedly carried it into battle with him because of its ability to stop blood hemorrhaging from a wound. Many of its names reflected this quality, including staunchweed, knight’s milfoil, soldier’s woundwort and herbal militaris. In China, it was used in divinations, while medieval Europeans used it in an herbal mix for flavoring beer before hops was introduced. Throughout history, the use of yarrow that has endured longest is its use for making herbal tea. Achillea millefolium tea has many positive qualities, which include its ability to promote digestion, ease inflammation, and fortify the immune system, merely to name a few. 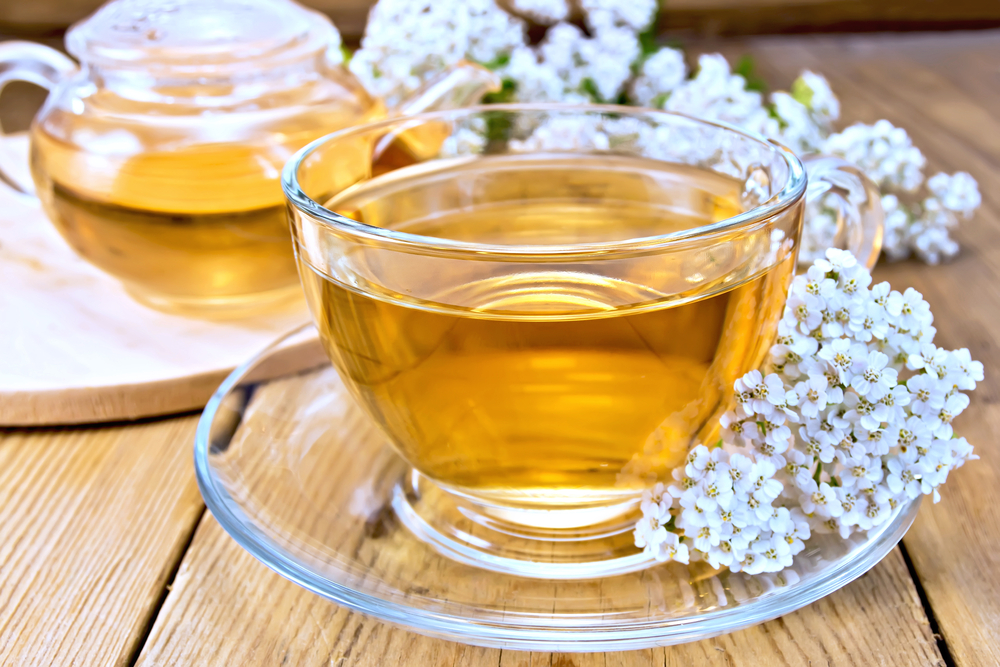 Protects Against Cold and Flu

Achillea millefolium tea offers many helpful effects for protecting against and shortening the effects of respiratory viruses such as a cold or influenza. Because of its antibacterial and antiseptic properties, it is able to aid the immune system in eliminating infectious bacteria and viruses. Because of its ability to loosen and clear phlegm from the airways, achillea millefolium tea can be employed to ease a cough and soothe a sore throat. Furthermore, its diaphoretic properties can induce sweating and may reduce a fever.

Oils found in achillea millefolium have shown anti-inflammatory properties. This is highly beneficial not only for reducing swelling at the site of an injury, but also for easing joint pain and various other inflammatory conditions.

Achillea millefolium tea can promote healthy digestion by stimulating the gall bladder, which produces digestive bile. This helps to digest food more effectively, particularly a heavy meal. Its anti-inflammatory and antispasmodic effects are also important, as they help to relax muscle spasms and inflammation in the digestive system, easing such symptoms as nausea, stomach cramps and diarrhea.

Another of achillea millefolium tea’s effects is promoting healthy circulation. Yarrow is known to tone and strengthen the blood vessel walls, making them more flexible. It also helps to dilate the blood vessels to allow for better blood flow. This tea also offers an anti-clotting effect that keeps blood from clotting together, thus reducing the risk of blockage in the blood vessels.

The various effects of achillea millefolium tea are very important for promoting women’s health and easing the uncomfortable side effects of menstruation. Yarrow tea can help to naturally ease the painful cramps of menstruation because of its antispasmodic effects. By relaxing the uterine muscles, this tea reduces the painful cramping that often accompanies menstruation. Increasing blood circulation also helps to supply the uterus with oxygen, which is needed during menstruation. In the same way that yarrow tones the blood vessels, it may also tone the uterine muscle, thus making the muscle stronger and further reducing menstrual cramps.

Achillea millefolium tea also helps to promote healthy kidney and bladder function. This tea acts as a diuretic, a substance that promotes more frequent urination. Increasing urination causes more of the toxins, waste and excess fluid to be flushed out from the kidneys and bladder, thus eliminating harmful substances and protecting kidney and bladder health and function.